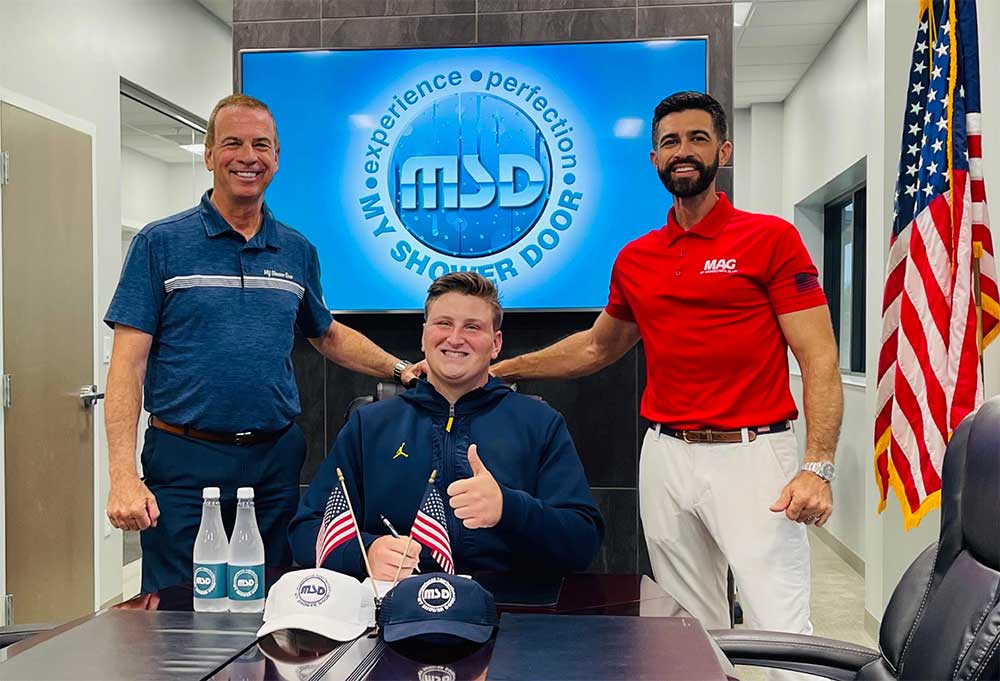 FORT MYERS, Fla. (July 8, 2021) — One of Florida’s fastest growing companies, MY Shower Door, is proud to announce that it has officially signed University of Michigan rising freshman football player Peter Simmons III to represent the MY Shower Door brand. Simmons III is the son of the former mayor of Bonita Springs, Peter Eric Simmons and a proud Bishop Verot alumnus. MY Shower Door may be the first to sign a college athlete since the NCAA announced its new rule that went into effect as of July 1, 2021, allowing college athletes to monetize their name, image and likeness.

“We are proud to partner with Peter Simmons III to promote our brand and more importantly to continue our mission of supporting youth entrepreneurism and sports,” said MY Shower Door co-owner Bill Daubmann. Daubmann added, “Our team at MY Shower Door is excited to follow Peter’s college football career with the Wolverines and proud to have him representing our company.”

A local hometown football star, Peter Simmons III was an Offensive Lineman for the Bishop Verot Vikings and a 2021 graduate of Bishop Verot High School located in Fort Myers, FL. After receiving numerous college offers, the 6-3, 305-pound Simmons III committed to the University of Michigan Wolverines on November 26, 2020. Now a freshman with the Wolverines, Simmons III looks forward to a stellar career in the Big 10.

“This is such an exciting time for college athletes, and I am honored to represent MY Shower Door during my college football career with the Wolverines,” said Simmons III. “I think it is great that the NCAA now allows college athletes to be rewarded and compensated for our name and likeness.  It is very exciting to have our hard work and dedication over the years recognized.  As the fourth consecutive generation to attend the University of Michigan, and having my great grandfather being part of the team that dug the hole for the BIG HOUSE in the 1920’s, this truly is a dream come true,” concluded Simmons III.

This may be the first time a Florida-owned company has signed a college athlete, but it’s not the first time MY Shower Door has stepped up to support local youth and entrepreneurism.  The Daubmann family who owns MY Shower Door / D3 Glass, has been instrumental in developing and supporting high school mentorship and internship programs in Southwest Florida. The company recently hosted the region’s inaugural Workforce Signing Day celebrating several dozen high school graduates who officially signed on to work with top companies in the area after graduating and completing internships.

Learn more about MY Shower Door / D3 Glass at MYShowerDoor.com.

MY Shower Door / D3 Glass is owned by the Daubmann family of Bill and Donna Daubmann along with sons Keith and Doug. MY Shower Door, founded by the Daubmann family in 2003, has grown from 56 employees in 2014 to over 100 this year with showrooms in Fort Myers, Naples (2), Sarasota, Tampa, St. Pete and Orlando. The firm also has affiliate stores in Oklahoma City, Okla.; Edmond, Okla.; Grand Rapids, Mich.; St. Paul and Minneapolis, Minn., and York, Pa. D3 Glass, which started in 2013, continues its explosive growth in glass fabrication and tempering, allowing the company to manufacture its own glass and expand the company brand over the past seven years. Its line of products includes laminated glass, decorative glass, glass stair railing systems, office partitions and wine closets. MY Shower Door / D3 Glass has received local, regional and national recognition for their business accomplishments and products, including the “Business Ambassador” award from then-Gov. Rick Scott and Manufacturer of the Year by Lee County’s Horizon Council and Horizon Foundation distinction. In addition, MY Shower Door has been ranked in the INC 5,000 on five separate occasions due to their rapid growth and MY Shower Door, Tampa, has made the INC 5,000 list on two separate occasions. For more information, call Bill Daubmann at 239-596-3255 or visit MYShowerDoor.com.

Bill Daubmann
https://www.aboveboardchamber.com
This article was submitted by a Guest Author of the Above Board Chamber.